The second biggest party in the state – Job well done. 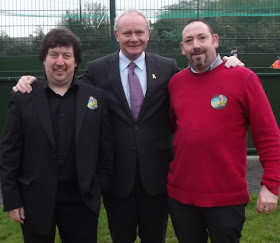 Who was the big winner last Friday when the votes were counted for the Presidential and Dublin West By election, as well as the amendment bills to the constitution?

Well certainly it was a good day for the Labour party, and there’s no doubt that Fianna Fail are celebrating victory despite losing their last foothold in the capital and becoming the first Fianna Fail party in history to have no representation there. Their candidate David McGuinness polled well, as did their de-facto presidential candidate Sean Gallagher. Of course ask most Gallagher supporters why they voted for him and they won’t mention Fianna Fail. In fact, they would likely reject him if he wore the tag of official Fianna Fail candidate.

History will surely judge Sinn Fein as the big winners of this campaign however. Two party percentage polls taken during the election had Sinn Fein listed as the second most popular political party in the state, ahead of Labour and Fianna Fail.

There can now be little doubt that Sinn Fein is the main party of the opposition, leading the voice against austerity and identifying itself firmly as the people’s party.

Ask anyone not interested in politics in this state who the leader of Fianna Fail is, or to name their front bench, and you will get few correct answers. Ask them the same question about Sinn Fein and the names Gerry Adams, Mary Lou McDonald and Pearse Doherty roll off their tongues.

The future now looks bright for Sinn Fein as the party goes from strength to strength. Martin McGuinness’s brave decision to run in an election where there was never any doubt that he would be mercilessly targeted by a vile media has paid off. The people of Ireland are no longer willing to shy away from a candidate when the establishment set their media hound and their conservative altered history book of Ireland upon them.
Share